We've been super busy in room 507 and we are way behind on sharing what we've been up to lately!  Before the Thanksgiving Holiday, our students took a closer look at life for a Native American and Pilgrim child.  We read two great Scholastic News for Kids articles and followed it up with a graphic organizer.  I wish I snapped a picture of one to share!  They had to compare and contrast what Native American and Pilgrim children wore, what they ate, what chores they completed, and what they did for fun.  They also had a column to fill out including information about themselves!  To wrap up the three day week, our students completed these: 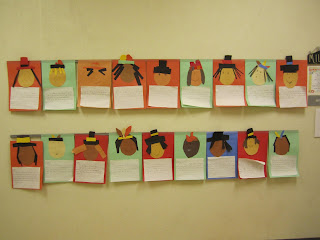 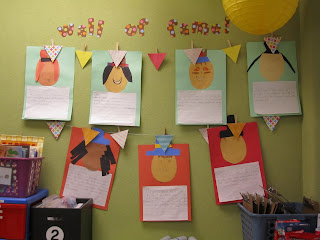 The students began with the prompt, "If I were a Pilgrim/Native American girl/boy I would..." I was really happy with how they turned out!!!  Here are some of my favorites: 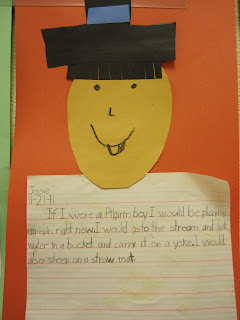 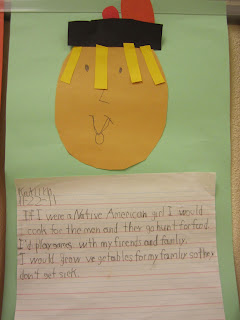 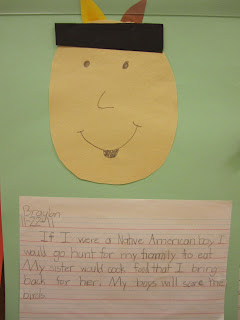 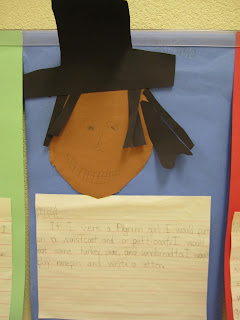 The students really had a great time working on these and I couldn't believe how much they remembered!!!
During the week we also read, "The Thanksgiving Story Bracelet," which was found on Pinterest.  After reading the poem, the students had to make their bracelets by sequencing the story.  Then they took turns retelling the story to their "shoulder partner" (Kagan Structure) using the beads on their bracelet to prompt them.
In science, we took a closer look at how the Native Americans taught the Pilgrims to grow corn successfully using fish for fertilizer.  The timing couldn't have been better because we had just wrapped up our unit on soils!  To make it fun, each student received a chocolate jello pudding (as the soil).  They then placed a corn seed (one candy corn) into the "soil".  Next they fertilized it with fish (Swedish Fish).  Then they covered it with dirt (crunched up Oreos)!  To check for understanding, students had to complete a sheet that went along with the activity and our soil unit.
The last day the students had the choice to be either a Pilgrim girl/boy or a Native American boy/girl.  Each choice accompanied a different craft that would be worn for the reader's theater play we'd been practicing about the first Thanksgiving. 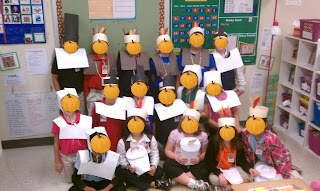 I am so thankful for our 18 wonderful students!
Posted by Cole Elementary at 9:51 PM